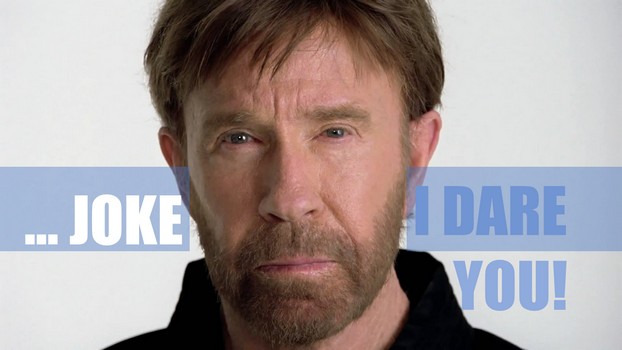 1. All of Chuck Norris’s competitors backed out of the trade show when they heard he was exhibiting.

2. When Chuck Norris jumps in the hotel pool, he doesn’t get wet…the pool gets Chuck Norris.
3. When Chuck Norris had a typo on his exhibit graphics, Webster changed its spelling of the word.
4. He doesn’t need crowd gatherers when he booth staffs; he needs crowd dispersers.
5. Show contractors are so scared of Chuck Norris, they don’t charge him for any show services.
6. The Marshalling yard was named after him.
7. The city once renamed the street outside of the convention center after Chuck Norris but had to change it back because no one would cross Chuck Norris.
8. When the General contractor delivered his final invoice to Chuck Norris, they owed him money.
9. The show closed early so he could make his flight.
10. Chuck Norris is so smart, he selected a show where 100% of the entire buying market was attending.

11. He sold his soul to the devil for the best spot at the trade show. Then, he gave the devil a roundhouse kick and took it back. They laugh about it Thursday nights playing poker.

12. Chuck Norris installed an island trade show exhibit in just one hour.  Without tools, instructions, or a ladder.  On straight time.  With a 15-minute break.

13. He doesn’t need to qualify leads, because all his leads are “A” leads.

14. He can set up a banner stand in under a second – just by looking at it.

15. Chuck Norris doesn’t need to measure his trade show results, because they all bought.

16. He held a raffle at his booth. First prize was a promise that Chuck Norris would not roundhouse kick you in the face.

17. None of the brochures Chuck Norris gives attendees get thrown away before the attendees return to their offices.  Or after.

18. Chuck Norris had his island exhibit completely packed after the show — before his crates returned from drayage.

19. Chuck Norris took a lead from every single attendee at the show.  On the first day.

20. During a presentation Chuck Norris was giving near the end of a trade show - all the clocks stopped until he was finished.

21. During a power outage at a trade show everyone’s booth went dark, except Chuck Norris’. The dark is afraid of him.

If Chuck Norris were writing Chuck Norris exhibitor jokes, he would have come up with 100.  Help a regular guy out, and add your own to get us to 30!