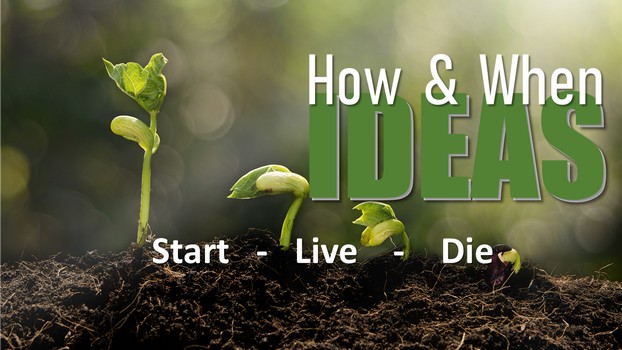 “When was the last time you had a life-altering bright idea? They don’t come easily, do they? Of course, some people seem to burst with great ideas, their subconscious mind releasing little gems of genius to their conscious mind with little effort. For most of us, however, birthing a great idea takes a little application.

The Birth of an Idea

We’ve all heard of the “Aha!” moment when a stroke of genius hits and an idea magically appears. In 1940, a young Swedish man witnessed someone trying to cram a huge table into their car by removing the legs. He immediately had the idea for flat-pack furniture and, well, you’ve heard of IKEA, right?  The idea for GoPro was instantaneous when its inventor, Nick Woodman, found himself surfing and wishing he could take his own picture. Suddenly he thought, “I COULD!”

Wonderful and true as they may be, these moments are rare. Most great ideas are born out of work – taking initiative, seeing a problem, brainstorming solutions. Additionally, there’s probably no better application of the old adage, “Two heads are better than one.” Trying to crank out a great idea is made for a team. More heads equal more input, more knowledge, more experience.

The Life of an Idea

So, you’ve got a great idea. Now what?! Wouldn’t it be lovely if it just blossomed on its own? Actually, once an idea is born, the real work begins. Every idea needs a combination of a creative eye AND a critical eye, to be nurtured in an environment where a combination of fluid thinking and steadfast knowledge live in tandem. An idea needs both a firm foundation and some “lift” to help it along. It needs to be fanned into a flame.

Again, this is where a team of people is crucial – where different perspectives and personalities and experiences offer time-saving, money-saving input. At this stage of brainstorming, both the practical and the more romantic questions need to be asked: How much will it cost? Do we have the resources required? Do we have the skill set? Do we have the passion to see this through? Are we committed to it?

The Death of an Idea

If a great idea is born of effort, it stands to reason that the lack of effort would cause its demise. A great idea is only that without the elbow grease, funding, follow-through, and teamwork it takes to mature it. Henry Dodd wisely observed,  “The reason most people do not recognize an opportunity when they meet it is because it usually goes around wearing overalls and looking like hard work.” Plenty of great ideas have gone nowhere and achieved nothing due to merely not being worked on. Just as it’s unrealistic to think that Bill Gates or Thomas Edison just left their ideas to take care of themselves, it’s ridiculous to think our ideas should take off without us.

So, maybe you have an idea rolling around in your head that you have never quite worked out into the open. Maybe now is the time to birth it and give it some life. Roll up your sleeves, grab your team, and grow that baby into the next genius idea!